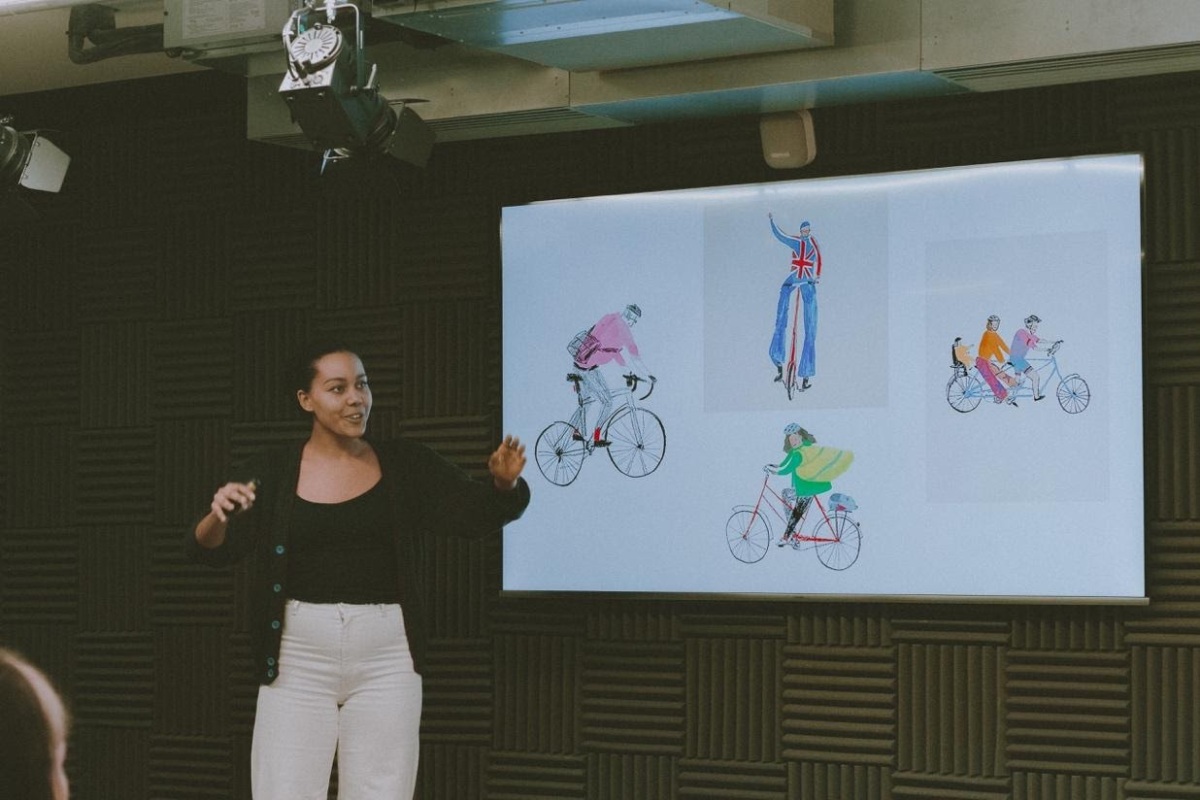 Originally from Poland, Danielle Rhoda moved to Manchester via Nottingham to study Illustration and Animation and has considered the city a home away from home ever since.

An extremely talented artist and illustrator, Danielle has worked with some of the city’s most exiting emerging creatives and agencies from Fuse Manchester and Yolk to cultural institutions including the People’s History Museum. Alongside creating her own prints and greeting cards, Danielle also runs The Big Drink and Draw, an online meeting place for creatives to connect with one another during lockdown.

We caught up with Danielle to talk about her love of the north, what it’s like for young creatives entering the workplace and the projects she’s proudest of.

Can I start by asking you to tell us a little bit about yourself?

I’m originally from Poland where I lived until the age of 13 at which point I moved with my family to Nottingham. I came to Manchester to study Illustration and Animation and stayed here since. I like to think of myself as a northerner at heart which you can tell by the way I love chips with gravy!

Did you know you always wanted to be an illustrator and artist?

Like many, I’ve had a strong interest in art and drawing since a young age. I’ve always loved making things, whether it was a painting or creating 3D shapes out of paper or clay. I’ve always had a thing for recreating things I saw around me.

Although since I can remember I fancied the idea of one day creating illustrated books it wasn’t until coming onto a foundation course that I was guided towards illustration.

When approached or commissioned for a piece of work, where do you start, what does your creative process look like?

Much to my surprise I have found a new passion for research! While I do begin drawing and noting down ideas as one of the first steps I cannot progress without finding all that I can about the subject. Having developed my practice around observation I need a good set of visual prompts which ground my style. My favourite way to do so is to go outside and draw from life. Even on the day to day (before lockdown) when out and about I would often have my phone at the ready so that I could capture interesting characters. They could then evolve and merge into illustrations. That and really trying to memorise people’s quirks and funky outfits.

Looking at your career to date, what have been some of your favourite projects that you have worked on?

To date it would have to be working with the People’s History Museum to create a visual language for this year’s set of exhibitions all around the theme of Migration. Having only been freelancing for a short time up to that point it was the first ‘proper’ brief I worked on. Such a great experience working on a topic that is so close to my heart. The team gave me pretty much total freedom and trust so I could really get playful with my style. It was also the first time seeing my characters play out in a live situation like this and on a range of scales. Of course, unfortunately, due to the lockdown, the museum has shut its doors and many events have been postponed so it won’t be until later in the year we’ll really get to delve into their exciting programme.

You currently live in Manchester, where else have you lived and work and what impact did these locations have on you and your creative output?

Before moving to Manchester in 2015 I lived in Nottingham where I did an Art & Design Foundation course. During that time, my first ever job was working as a GA at the Nottingham Contemporary. For several years the gallery felt like my second home. I became a member of their youth program at the age of 15 and it was one of the best things I could have done. It gave me a real insight into the world of art. The team was very welcoming and I got to see many of the backstage processes to putting up exhibitions and creative events. That was a big influence for me at the time and spurred me onto pursing art.

What are some of the challenges of your profession, or more generally in the creative industries?

Not enough information. Very soon after graduating I realised how little of the business side we got to see or understand at university. Although it seems to be slowly getting better, the industry often doesn’t seem all that welcoming to graduates with many opportunities still happening in closed circles and behind closed doors. It’s incredible to see more and more people realising this and speaking out but more needs to be done in order to make the creative industries more inclusive and less privileged.

There are so many brilliant new creatives trying their way in every year and I strongly disagree with the mindset of ‘they need to learn the hard way because we did’. Of course when first starting there are lessons to be learned but I think we all should feel a collective responsibility to make the learning as easily accessible as possible. Sharing tips, discussing experiences, introducing people, shouting out about new talent, getting real about finance (!)  and all in all feel a bit less protective of our knowledge and instead passing it on. That’s where the real progress can start, right?

Have there ever been any barriers for you as a woman in the industry? Or generally speaking do you think the industry is diverse enough?

The workplace in general, within and beyond the creative industry is not diverse enough. I cannot believe that in 2020 one might not be able to get into a certain role because of their gender and or background. However, it does feel like right now we’re in a very important moment where this is becoming part of daily conversation. I remember sitting in a lecture where the speaker explained how the majority of creative positions are taken by white men and I being neither white or male was prepping myself for a much tougher journey than many in this field. Saying that, I’m a strong believer in marching on no matter what and having the work speak for itself. I might be mixed-raced but beyond that and more importantly ABOVE that, I am just an artist.

What do you like about Manchester and its creative network?

The main reason for why I came to Manchester in the first place was because I’ve heard so much about its creative community. It is such an exciting place to be in right now, there’s a real sense of togetherness which is totally in line with the vibe of the city overall. I love the fact that we’re not as big as London; it really does feel like after a short while you start to recognise many faces.

The city is constantly evolving, especially in recent years, and more and more stripped back, real-talk events are taking place and I can’t wait to see what’s more to come. A little shoutout here to people, teams that made me feel more part of the community: Fuse, Yolk and of course NRTH LASS!

Do you think it is possible to have a fulfilling career in the north?

I think it is definitely possible to have a fulfilling career in the north, there are many creatives who already do and have done so for a while. We are beginning to see a real shift of focus which is coming with talks about diversity and mental health. It is no longer imperative one has to move to London in order to have a great creative career. Technology is playing a big part in this but also the general want of representing more than one voice.

With this in mind, I still believe it is harder to get yourself going outside of London or the south in general but good things don’t always come easy do they! What’s interesting is seeing how other cities in the north are rising up to the challenge and the connections we’re all starting to build. There is real creative power here and the more people realise it the better it will get. (You wouldn’t be able to tell I’m not from here, freaking love the north).

What do you love about the north?

We could be here all day! I love the people, such a warm, friendly bunch. Chips with gravy, but I think I already mentioned that. I love finding out stories about the rich heritage of the north. Especially being based in Manchester, there is so much that’s been forgotten about and is coming to light again.

I’m a real sucker for the architecture as well; layers upon layers of different styles, giving the cities a gritty but beautiful texture and acting as physical time stamps. Also have you been to a northern city in sunshine? No one has the same appreciation for sunlight as a warmth-starved northerner, the whole place comes to life.

Where are some of your favourite creative places to work and socialise in Manchester?

Before the lockdown it was the endless list of all the beautiful cafes, like Foundation Coffee House, my fave being the one on Whitworth St, Ezra & Gill and TAAK to name a few as well as hidden bars such as Double Down and the downstairs bar in Sandinista! I’ve always been a foodie. Socialising for me means eating so I’m very much looking forward to eating out again and hope Manchester’s food scene will thrive once again.

Outside of work, what are some of your passions and hobbies?

A trick question for any creative! Outside of work I still love drawing and art in various media be it film or music. As mentioned above I LOVE food, but in addition to eating I really enjoy cooking, it’s a great way to relax.

Have you pursued any new pastimes during lockdown?

I’ve taken up a bit of gardening, feeling a bit wiser than my age of 24. I’ve also gone back to some forgotten, abandoned hobbies of playing the guitar and piano and have been trying to read more. A book I’m currently reading is Half of a Yellow Sun by Chimamanda Ngozi Adichie.

If you could give your younger self one piece of advice what would it be?

Are there any new projects or pieces of work that you would like to give a shout-out?

Currently, I’m tugging away on a collection of greetings cards I have officially become gold foil obsessed. On top of that I’m working on some very exciting collaborations and will be sharing them soon on my ig!

To see more of Danielle’s work and check out some of her latest projects head to her website or Instagram.

Danielle will be speaking at the next PechaKucha Night Manchester, Vol. 31 on the topic of ‘Migration’ on the 9th July, speaking about her work with the People’s History Museum and their programme on Migration.